The Vall de Gallinera City Council has republished the book The Cholera of 1885 in Vall de Gallinera, published in 2007. This new installment presents new studies and contributions on the phenomenon that the municipality suffered, causing high mortality rates at the time.

The author, Emili Aragón, has expanded the study with a more global perspective of the disease, since a catastrophe of this entity changes all aspects of society: health, social, political, cultural, among others.

The author affirms that one of the main references has been the digital consultation of the press of the time through the Newspaper Library of the National Library of Spain, where he was able to do a daily follow-up not only of the icy numbers of sick and dead from the heated debates of Congress and the Senate between government and opposition or the official measures to be taken by the different administrations, but also of the personal or community tragedies that the population had to endure, of incredible acts of selfishness or heroic solidarity, of situations of violence extreme and despair, of the behavior of people in the face of death and its relationship with popular devotion or of the lies of local administrations to avoid the collapse of the economy, hunger and misery.

The author has also been able to access, and this is reflected in the reissue, the documents whose existence was unknown in the first edition. Among them the statistics of 1885 and the memory of 1886 written by Dr. Jaume Ferràn, the diary of Dr. Miralles de Ondara or the works in the regional area of ​​J. Bernabeu on Pego and JX Esplugues on Dénia.

In this study, we have considered making some brief comparisons with the Covid-19 epidemic, since the Spanish population had not experienced a similar health situation since the 1918 flu.

Next Saturday, September 10, the Benialí Town Hall building will host the presentation of the second edition of The Cholera of 1885 in Vall de Gallinera. The appointment with the author, Emili Aragó, will be at 19:00 p.m., when new studies on the phenomenon at the end of the XNUMXth century will be discovered. 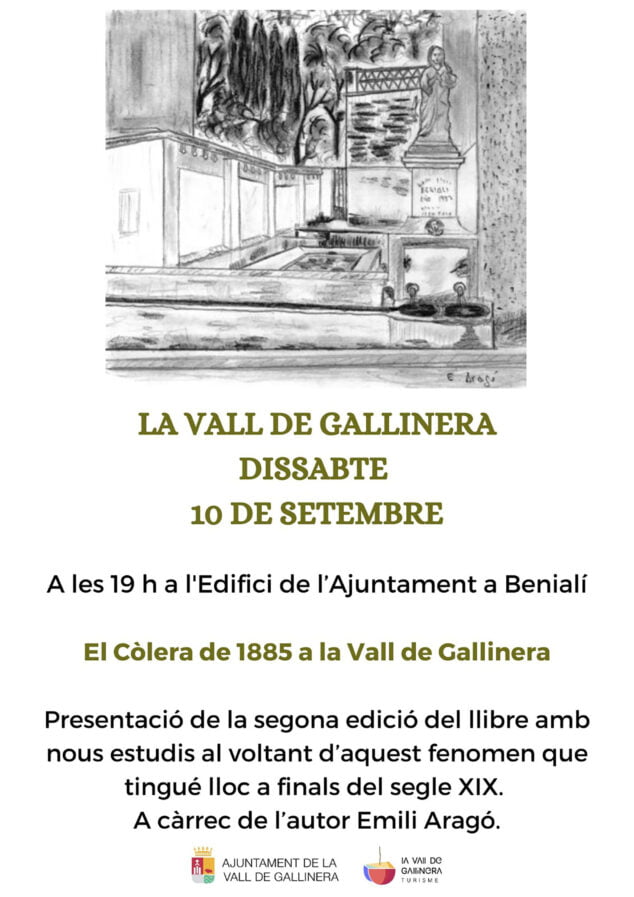 The «VI Fira Marina Alta with 5 sentits. L'oïda» pays homage to the musicians of the region in Ondara
November 14th 2022

5.430
1.669
We use cookies necessary for navigation and traffic analysis. We do not use cookies that provide us with personal data or advertising cookies.
More optionsACCEPT
Manage consents