Next Thursday, September 15, Teulada Moraira will host the first Japanese Butoh dance show that combines dance, music and sculpture on the same stage.
The unpublished performance, performed by the dancer Fred Herrera and the saxophonist Javier Valerio, confronts the Gigante de Sal de Coderch y Malavia sculpture with Herrera himself, who was the inspiration for the creation of the work. 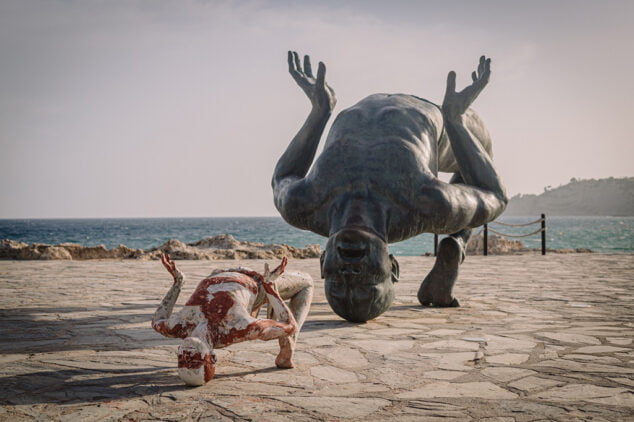 Salt Giant with a dancer in Moraira

The show will take place on the Esplanade of Moraira Castle, at 20:XNUMX p.m., and both the Teulada City Council and the sculptors encourage all citizens to attend this free event. It should be noted that it will have the collaboration of the members of the local Teatre El Portitxolet de Moraira association.

The international artists Fred Herrera and Javier Valerio, originally from Costa Rica, have created this unique show for their representation in the municipality of Alicante. The original music of Valerio, guest of the University of Costa Rica, will weave this Thursday the dialogue between the Japanese inspiration of Butoh dance and the magic of monumental sculpture, coinciding with the national day of his country.

The show is presented as a "face to face between bronze and blood" where dancer and work finally come together since in 2019 the sculptors Coderch and Malavia, winners of the Reina Sofía Prize for Sculpture and Painting, developed the piece that It has already passed through Valencia, Munich, Capri or Toulouse, among other cities.

The 'Giant' is a symbol of hope and resurgence after collective crises such as the pandemic and wants to inspire and promote collaboration between peoples and people. Through this exhibition of various disciplines, Coderch and Malavia are once again committed to taking art out of galleries and exhibiting it on the street.

The mayor of Teulada Moraira, Raúl Llobell, has assured that "it is a pleasure to receive the dancer Fred Herrera to be able to make visible the origins of the 'Salt Giant', making both residents and visitors understand the reason for the sculpture, its meaning and its relationship with Butoh dance”.

The performance will take place in a privileged and historic location facing the sea, such as the esplanade next to Moraira Castle, which will also play a role in the performance. Those interested in attending can confirm attendance before the 12th by sending an email to alcaldia@teuladamoraira.org.

The «VI Fira Marina Alta with 5 sentits. L'oïda» pays homage to the musicians of the region in Ondara
November 14th 2022

5.430
1.669
We use cookies necessary for navigation and traffic analysis. We do not use cookies that provide us with personal data or advertising cookies.
More optionsACCEPT
Manage consents